Seigniorage: It relates to money and it’s the difference between face value and the cost of production. Basically, it’s the profit that comes from creating money.

In a backed currency Seigniorage is minimal; a shekel for instance has to contain something like a shekel’s worth of silver, or else it gets rejected.

With fiat money however— that is money backed by confidence rather than metal, then seigniorage is a key issue. For instance if it costs a penny to print a ten dollar bill, then the seigniorage on that bill is $9.99.

That margin is all profit, to be reclaimed by the producer of that money. In modern society, that money is legally owned by the public. The issuing power is legally bestowed upon representative public institutions.

In practice however, money is produced by private banks. Here’s how: you make a deposit into the bank and they retain a portion of that deposit to allow withdrawals. The rest it lends out as quickly as possible. This practice is known as fractional reserve banking.

If the reserve requirement is 10%, then a bank will lend out the remaining 90%, by simply crediting the borrower’s account—an act that costs almost nothing. This new credit deposit can then also be lent out at 90%. And so on. In this case, an introduction of $100 into a system with a 10% reserve requirement actually leads to a $1000 increase in the money supply. This value is created freely by the bank and legitimized by the fractional reserve system. It’s a very generous public subsidy.

Of course the practice of leveraging loans against deposits ultimately leads to a “run”. That’s when actual account holders demand more money at one time, than the bank has available in deposit. Spectacular examples include the Great Depression and the recent credit crunch.

This is why money creation should be reserved for the sovereign power of government. As it legally should be. However in practice these collapses in confidence have further formalized the banking privilege by the mandate that the Government will guarantee deposits if the banks fail.

And so Central Banks are given free reign with money creation and the resulting collection of seigniorage. Which stems from interest on the loans they made with that free money they created.

Now how much is that seigniorage worth exactly? Well, the U.S. economy for instance currently operates a $7.7 trillion money supply. Of this almost 10% -only $746 billion- is actual currency issued by the Treasury- the seigniorage on which goes into public funds. The remaining, $7 trillion, lies within private bank balances.

Given the cost of entering pixels into databases is almost negligible and nearly all modern money is created in this way, then the current seigniorage is equivalent to the remaining balance. That means the US economy just gifted ‘Seven Trillion Dollars’ to private banking institutions. Co-incidentally, that’s more than the US government spent on two world wars, Korea, Vietnam, Iraq, the moon mission, and all Social Security combined.

The good news here is that capturing seigniorage for the public treasury presents no technical challenges. Quite simply, a 100% reserve requirement on demand deposits would be enough to prevent banks from engaging in money-creation.

As a new reserve requirement is phased in, the Treasury could spend money into existence at an appropriate rate, hereby replacing the exact quantity of money that banks are no longer creating. This would keep immediate macroeconomic effect to a minimum and end a huge public subsidy to the banking system.

The effect would mean that loans could only be made out of savings and not from the creation of money. This means that someone, somewhere in the system, would have to refrain from consumption today in order to increase consumption later. Of course we’d have to change how we do things, but that’s not a bad thing and there are many reasons why.

One consequence of doing this is that we would no longer pay for our consumption today by passing the expense to our children and grandchildren. Bankers, of course, will be against such change. Money creation is a very lucrative business and naturally they’d do everything in their considerable power to retain the privilege.

The wider positive effects however are tremendous. For instance we’d immediately dampen boom-and-bust cycles, which are a consequence of letting debt grow too rapidly. This would mean a dramatic reduction of inflation, bankruptcies, foreclosures, mortgage defaults, stock market crashes, bond failures and so on. All of which trace back to growing debt faster than growing wealth, the principal cause of which is fractional reserve banking. If money was created and then spent into existence by the government, this would not create such a burden of debt.

So that’s Seigniorage. Hopefully you understand a little more about what is and why we should change it. 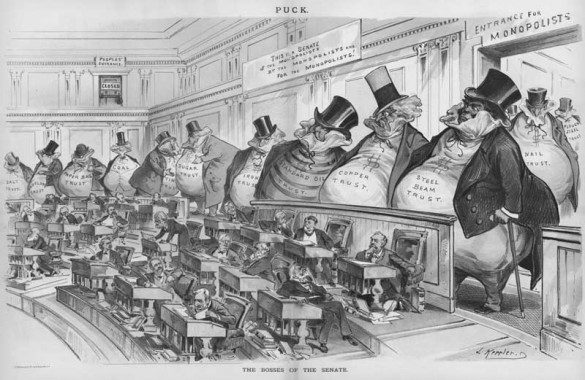